From Laramie to London (1917) watch online


An Englishman and his valet tour the American West. 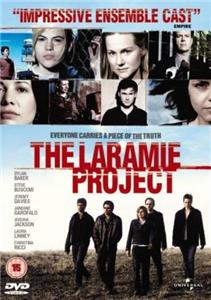 The true story of an American town in the wake of the murder of Matthew Shepard.

Moisés Kaufman and members of New York's Tectonic Theater Project went to Laramie, Wyoming after the murder of Matthew Shepard. This is a film version of the play they wrote based on more than 200 interviews they conducted in Laramie. It follows and in some cases re-enacts the chronology of Shepard's visit to a local bar, his kidnap and beating, the discovery of him tied to a fence, the vigil at the hospital, his death and funeral, and the trial of his killers. It mixes real news reports with actors portraying friends, family, cops, killers, and other Laramie residents in their own words. It concludes with a Laramie staging of "Angels in America" a year after Shephard's death.


In one scene, Rebecca Hillicker (Camryn Manheim) is directing a rehearsal of a play that Moisés Kaufman (Nestor Carbonell) says he "never gets tired of" (and Hillicker responds, "Yeah, well, try directing it fifty times."). The play is "Our Town" by Thornton Wilder, which won the 1938 Pulitzer Prize for Drama and has been a staple of community, college, and high school theaters ever since. Like "The Laramie Project", "Our Town" is a play about a typical American small town and the impact on that town's citizens of the death of a beloved young person.

The film was to make its HBO debut on March 16, 2002, but was pushed forward a week when NBC scheduled The Matthew Shepard Story (2002) for the same day.

Members of the Tectonic company who originally conducted the interviews in Laramie are featured in the movie.

The Jedadiah Schultz character (played by Jeremy Davies) talks about winning a competition by performing a scene from the play "Angels in America" by Tony Kushner. Kathleen Chalfant, another member of the "Laramie Project" cast, played Hannah Porter Pitt, Ethel Rosenberg, and other roles in the original Broadway production of "Angels in America".

Michael Emerson, who plays a homophobic reverend here, had also starred in a previous Moisés Kaufman production, the off-Broadway play "Gross Indecency: The Trials of Oscar Wilde." In that, Emerson played the gay Irish playwright Oscar Wilde, who was prosecuted and imprisoned for his homosexuality (which was an illegal offense in England until the late 1960s).

The parade was shot the first day of production in the midst of a snow storm. It was May.

Based on the actual people and events connected to the tragic death of a young gay student Matthew Shepard who became the victim of a widespread homophobia back in October 1998. His death led to a global acceptance of LGBT population as equal citizens.