A profile of the Trap Door Spider and how it camouflages itself in order to hunt its prey. 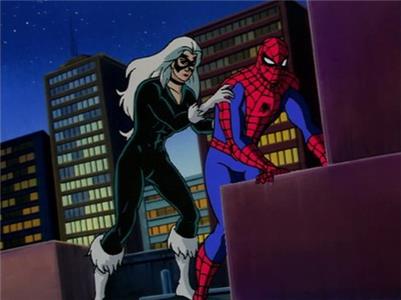 Spider-Man has been refusing to work with Black Cat because he doesn't want anyone close to him getting hurt anymore. Meanwhile, Kraven returns to New York to hunt down the Stalker, a creature he has been said to have created.


Kraven mentions he last met Spider-Man as friends and Spider-Man said Kraven once saved his life. Both of them are referring to New Spiderman: Neogenic Nightmare Chapter 8: Duel of the Hunters (1995) where Spider-Man transformed into Man-Spider.

This is the last episode to feature Linda Gary as Aunt May Parker. She died not long after recording her final pieces of dialogue of brain cancer.

The night stalking creature is actually Dr. Mariah Crawford. Kraven gave Dr. Crawford the life saving serum she previously gave him after she contracted a virus in Africa. Kraven gives her another serum that restores most of her humanity leaving her similar to her comic counterpart Calypso, Kraven's nickname for her on this series.

At the end of the episode, Peter decides to become Harry Osborn's roommate again since both of them took the loss of Mary Jane Watson pretty hard.