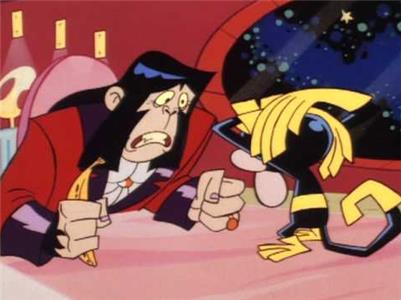 In "Dexter's Rival", Dexter clearly shows disdain for a new kid in school, who has a lab just like his, albeit a bigger and more superior one. In "Simion", the result of an failed experiment vows revenge against the humans that did it. In "Old Man Dexter", Dexter makes himself older so he can stay up later.


Production on this episode began long before the series premiered.

This is the first appearance of Mandark and Mr. Luzinsky.

This is the first episode when Dexter had his first day at school.

This episode seems to draw animation style comparisons to the first episode of Season 1, this would indicate that this was an old episode already completed before it was aired.

This episode is where Mandark first fell in love with Dee Dee.

This episode shows Dexter's computer physically interacting with him for the first time, by using a robotic arm to cling glasses with Dexter.

Honeydew was voiced by Paula Tiso in this segment, instead of Kath Soucie.

"Old Man Dexter" is the third pilot of "Dexter's Laboratory". It was the only pilot that didn't air in "What a Cartoon!", because it was declared unaired in the USA.

This is the first three episodes produced in the beginning of 1996.