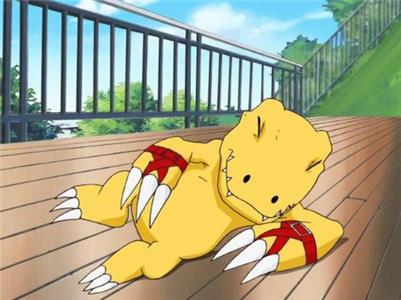 In the world we all know, there exists a secret organization called the Digimon Data Squad, or DATS for short. Humans and their tamed Digimon partners team up to capture Digimon who cross over into the real world from the Digital World (hopefully, before the population sees them and causes a panic). Secret Agent Yoshino Fujieda gets a call to chase down a rogue Raptor Digimon, but she finds him engaging a human in a fight. The human is a boy training to become an Ultimate Fighter, Marcus Damon. Amazingly, Marcus can hold his own with the supposedly much stronger Digimon. After they fight to a draw, the two combatants bond, and then flee together when Yoshi tries to arrest them. Marcus hides the raptor, named Agumon, and goes to get him food. But Yoshi finds Marcus, and takes him to DATS headquarters. Marcus doesn't believe that Agumon could be a danger, so he refuses to turn him over. But, suddenly, there is another Digimon attack in the city! Marcus rushes back to see if Agumon could...