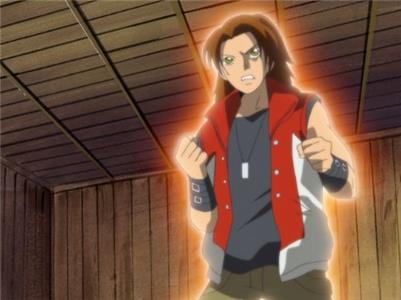 The Digimon gang goes back to Wanderer's Cape to seek out Marcus' father so he can fix their digivices. Instead of finding the upside-down mansion that used to be there, they are surprised to now find BanchoLeomon and his DNA Charge Dojo. BanchoLeomon separates the humans from their Digimon. He tells Marcus, Thomas & Yoshi that they must train in order to be able to understand their DNA charge. Until they have that understanding, they will be unable to fix their digivices. Neither Marcus nor Thomas can see the point of fighting BanchoLeomon's resilient wooden soldiers, but soon realize they are trapped in the Dojo and he won't let them leave until their training is completed. Yoshi just sits down and waits for the boys to either win or give up. Agumon, Lalamon and Gaomon are outside playing silly games to pass the time. But suddenly the three super-powerful Bio-Hybrids appear! When the Digimon refuse to reveal the location of their human partners, the Bio-hybrids beat them mercilessly...