A Confederate Civil War captain faces challenges as the Union army storms through South Carolina, destroying everything in its path. When he is sent 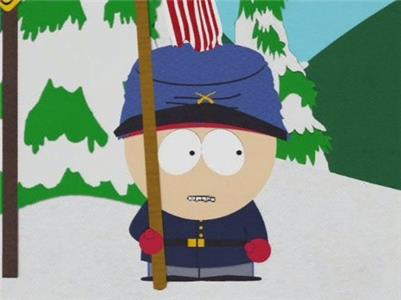 It's time for South Park's annual Civil War re-enactment, and the boys have been assigned to the Union army. Cartman's misbehavior gets him kicked out, however, and he shows up later dressed as the Confederate general. Angry at his friends for laughing at him, he bets them that the South will win the Civil War, and then starts inspiring his troops to start fighting for real. Not only does the Confederacy go on to win the battle, Cartman then begins leading them to take on the entire nation.


After the production of the previous episode, the voice actor of many female South Park roles, Mary Kay Bergman, committed suicide. Trey Parker and Matt Stone, still in shock from the tragic ordeal, did not feel like auditioning people right away, which is why this episode features no female voices (Trey Parker voices the S'mores Schnapps Lady and Kenny's mom appears with no speaking parts).

Contains the first appearance of Al Gore in South Park, and he is voiced by Matt Stone instead of Trey Parker, who voices him in later episodes such as South Park: ManBearPig (2006)

Jagermin's S'more-flavored Schnapps is 151 proof. It is a parody of Jagermeister.