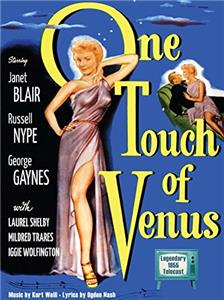 While in a museum of modern art, Rodney Hatch, a barber, places the engagement ring he bought for his girlfriend, Molly, on the finger of a statue of Venus. Magically the statue comes to life. Learning of Rodney's love for Molly, Venus banishes her to the North Pole and sets out to win the reluctant Rodney's love.


This "Hallmark Spectacular" was broadcast live from the Texas State Fair in Dallas.

'One Touch of Venus' opened at the Imperial Theater on October 7, 1943 and ran for 567 performances.