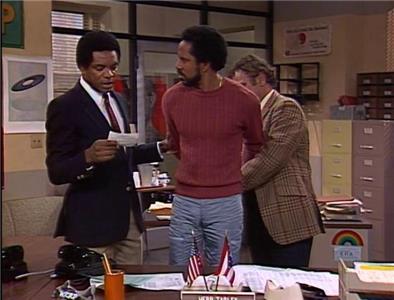 Venus is arrested on suspicion that he is the mastermind behind a series of robberies of a jewelry wholesaler located in the same building as WKRP. The arrest stems from he being given up by Jessica Langtree, a woman Venus had sneaked into the building after hours so that the two could have a date in the bullpen during his shift. Despite Venus believing the date going well, Jessica ditched him he now assuming so that she could commit the actual robbery with whoever else her accomplices. Other evidence working against Venus: he had played a pre-recording for about an hour that evening so that he could devote his attention to Jessica; although Andy was at the station that evening, he can't vouch for Venus' whereabouts except for a few minutes during the time of that recording being played; Venus had on his possession a diamond earring, one of the stolen pieces from a robbery, that earring which in fact was a gift from Jessica; and the security guard at the wholesaler saw someone fitting...

Michael Pataki (Det. Alcorn) appeared in the Star Trek episode The Trouble With Tribbles. Robert Hooks (Prosecutor) was in the movie Star Trek: The Search for Spock.

This episode was written as a two-parter but cut back to a single episode. Consequently the denouement (with the Venus lookalike getting arrested) was rushed.