Music video for Explosions in the Sky's "Be Comfortable, Creature". 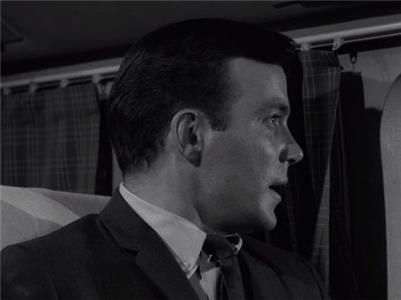 Bob Wilson is on a flight when he sees a creature of some sort out on the wing of the aircraft. He's only recently recovered from a nervous breakdown and isn't sure that what he is seeing is real. Every time someone else looks out the window, the creature hides from view. When the creature begins to tamper with one of the engines he begs him wife to tell the pilots to keep an eye on the engines. If they see nothing, he agrees to commit himself to an asylum when they arrive at their destination. His paranoia drives him to a desperate act.


Richard Matheson originally wanted Patricia Breslin to play Bob Wilson's wife, because she had played the wife of another William Shatner character very well in The Twilight Zone: Nick of Time (1960), a story also written by Matheson.

This episode was one of four to be remade for Twilight Zone: The Movie (1983). The relevant segment was directed by George Miller.

William Shatner (Bob Wilson) played Captain James T. Kirk of the Federation of Planets Starship Enterprise on The Naked Gun 2½: The Smell of Fear (1991) three years later. Ed Kemmer, who played the pilot of the plane Bob Wilson is flying on, played Commander-in-Chief Buzz Corey of the United Planets Spaceship Terra on Space Patrol (1950) 13 years prior.

According to director Richard Donner, William Shatner played an elaborate prank on set when he conspired with a friend who was visiting the filming, Ed Byrnes, to trick Donner into thinking Shatner died. Between takes, and when Donner was off set getting coffee, Shatner and Byrnes staged a fake fight atop the plane wing, some 30 feet above the studio's concrete floor. When Donner ran back in the studio to see what was happening he saw a body falling off the wing and Byrnes yelling in terror. Donner said when he ran to the fallen figure, thinking it was Shatner, he was greeted with laughter the moment Donner realized it was just an articulated human dummy the two men had found in another part of the studio.

Writer Richard Matheson said he was mostly pleased with Twilight Zone's version of his short story - except for the gremlin. He'd conceived it as a dark, creepy and nearly-invisible humanoid figure. "But this thing," he complained, "looked more like a panda bear."