An archaeology expedition in search of a lost Native American village are pursued by an unknown creature. 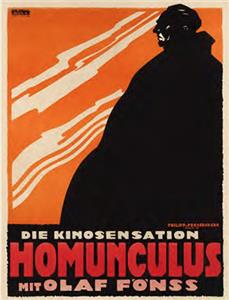 Part of the artificial-creature series encompassing Der Golem (1914 and 1920), Alraune (1918, 1928, 1930) and Metropolis (1926), 'Homunculus' was the most popular serial in Germany during World War I even influencing the dress of the fashionableset in Berlin. Foenss, a Danish star, is the perfect creature manufactured in a laboratory by Kuehne. Having discovered his origins, that he has no 'soul' and is incapable of love, he revenges himself on mankind, instigating revolutions and becoming a monstruos but beautiful tyrant, relentlessly pursued by his creator-father who seeks to rectify his mistake. {locallinks-homepage}