CBS News looks at Cold War tensions between the United States and the Soviet Union in this follow-up to a 1958 report. 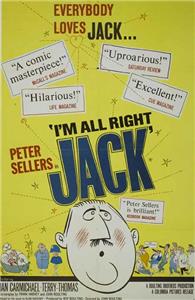 Naive Stanley Windrush returns from the war, his mind set on a successful career in business. Much to his own dismay, he soon finds he has to start from the bottom and work his way up, and also that the management as well as the trade union use him as a tool in their fight for power.

The 45 r.p.m. version of Al Saxon's theme song had different lyrics than the movie version.

The author of the screenplay, Alan Hackney, gives himself a nod by naming the girl on the Num Yum production line "Miss Hackney".

Two of the principals, Dame Margaret Rutherford and Sir Richard Attenborough ensure their respective spouses, Stringer Davis and Sheila Sim, aren't far away by getting them uncredited minor parts in this movie.

Two of the shop stewards in the movie, brothers Tony Comer and John Comer, got the roles after winning a talent show as a comedy double act, "The Comer Brothers". The prize was one thousand pounds sterling and a movie contract with The Boulting Brothers.

Ian Carmichael's character is called "Stanley Windrush". M.V. Empire Windrush was the name of the ship that bought the first group of West Indian immigrants to Britain in 1948.

The title of this movie refers to a well-known British expression that indicates smug and complacent selfishness.

Film critic and Peter Sellers biographer Alexander Walker was invited to the set by John Boulting one day. Walker looked to see where Peter Sellers was and Boulting said he was right next to the critic. Walker was stunned.

Cast in this film as father and daughter, Peter Sellers and Liz Fraser would work on another film the following year, this time as a couple.

Ian Carmichael was one of several people who witnessed the mini silent films made by Peter Sellers on the set of "I'm All Right Jack."

The title of the movie is "I'm All Right Jack". On the original British trailer, a comma was added to the title ("I'm All Right, Jack").