Nick and Frank Starkey were both policemen. A scandal forced Nick to leave the force, now a serial killer has driven the police to take him back. A 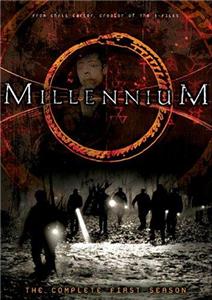 Former FBI profiler Frank Black returns to his hometown of Seattle with his wife Catherine, a clinical social worker, and their little daughter, Jordan. Frank, his old friend Lt. Bob 'Bletch' Bletcher, Det. Bob Giebelhouse from the Seattle Police Department, and Peter Watts from the mysterious Millennium Group that Frank works for as a consultant investigate a series of psychosexual homicides being committed by a deranged and confused serial killer driven by Nostradamus and biblical prophecies, who believes he's punishing his victims, mostly strippers and male prostitutes, for their sin of lust.

Over 17 million people tuned in to watch the pilot episode - a record at the time.

Lance Henriksen was particularly keen (certainly in the show's first season) not to make Frank Black a typical gun-toting detective. In fact, in this opening season, Black very rarely is seen with a gun in his hand.

The first of only four episodes in the series directed by David Nutter.

The image of the kidnap victim with his eyes and mouth sewn shut would be revived by Chris Carter in Expediente X (1993) in Season 5 in the episodes Expediente X: Patient X (1998) and Expediente X: The Red and the Black (1998).

Chris Carter was so impressed by David Fincher's Seven (1995) that he recruited that film's production designer Gary Wissner.

Fox spent $10 million on the show's launch, including running it in 25 cinemas around the country.

The first of three episodes in the first season written by Chris Carter.

Filmed over the course of a month - an unheard of amount of time for a TV episode.