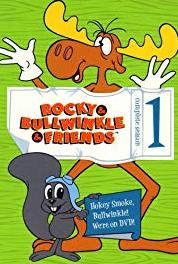 
The cliffhanger titles offered at the end of the episode (the end of "Topsy Turvy World" Part 12) are "Boom at the Top...or...The Angry Young Moose". This spoofs Der Weg nach oben (1959), one of the earliest of the so-called "angry young man" social realism films of the British New Wave movement (based on a novel from the "angry young man" movement in British literature).

After being assured by the chief that the "cold snap" on the island of Riki-Tiki is nothing to worry about (and that they're still in the Tropic Zone, not at the North Pole), the natives see Boris Badenov, dressed as Santa Claus, rolling up on a snowmobile and respond, "Then who that coming? Commander Whitehead?"

Commander Edward Whitehead, C.B.E., a former British naval officer and the president of Schweppes U.S.A. (tonic water, ginger ale, etc.), was famous as the face of Schweppes in advertisements during the 1950s and 1960s, and recognizable for his well-groomed beard.