Logline: When is it right to do the wrong thing? Two men on their lunch break notice a young woman walking by on the street. They also notice a man


A young woman, desperate to find self expression through her music in an environment that is hostile to her talents, is forced to consider her dreams


A young mother starts a desperate search to find out why her nine year old daughter suddenly doesn't speak anymore.


A desperate woman willing to believe in anything...


The lives of several individuals intertwine as they go about their lives in their own unique ways, engaging in acts society as a whole might find 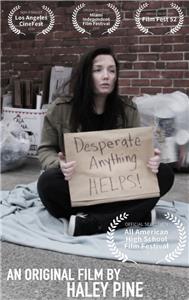 A woman desperate for the attention of a young man, becomes determined to find ways for him to notice her.


Official Selection in the 2018 All American High School Film Festival.

This was the first film produced by the director and writer.

Originally produced for the Rhode Island's Give Me 5 Film Festival created for Student Filmmakers by the Rhode Island Film and Television Office. It received an official selection in May 2018.

Creative director of Angelwood Pictures, Seth Chitwood, was a mentor during the production.

The same background actors are featured in most of the locations throughout the film.

The yoga scene was filmed on the second floor of the Barrington Public Library. During the library scenes, a few people at the library would accidentally walk by to get a book.

The costumes were all donated by Arts Alive and Academy Players to be featured in the film.

The short was filmed over just one day.

Originally, the male character was supposed to be deaf and feature a brief scene where the character does sign language. But, this was later changed right before filming started.

Even though filming was in April, it was a surprisingly cold day and the temperature was 34 degrees during the first two exterior scenes. The cast wore heavy winter coats and would throw them on the ground seconds before calling action.