When the distant world of Blobolonia is threatened by an evil and frightening emperor, one of its denizens makes the world-changing decision to stand


In the future, the world is down to its last source of water. A group of scientist go out to the dry lands to seek the one thing man kind needs to


In the middle of Indonesia, the most populous Muslim nation on earth, there is a tiny island where the people are almost all Hindu. The island is 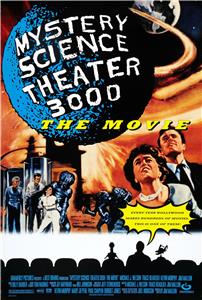 Mike Nelson and his robot companions watch and give their comments about This Island Earth (1955).

The mad and evil scientist, Dr. Clayton Forrester, has created an evil little scheme that is bound to give him world global domination but first thing's first. He plans to torment Mike Nelson and the robots by sending them a real stinker of a film to watch called, "This Island Earth." He is convinced that this movie will drive them insane. And since the guys cannot control when the movie begins or ends, they are forced to witness the true horror that is this awful movie that has a lobster creature dressed in slacks. But will this be the ultimate cheese that breaks the boys' spirits? It's up to one test subject's quick wit, sharp sense of humor, and utter intolerance for cinematic garbage to foil the plans of the scientist and to save the Earth.


The control panel for the robotic arms that Mike uses to grab the Hubble is marked "Manos." Manos, along with being Spanish for "hands", is also a reference to the movie Manos: The Hands of Fate (1966) which is generally agreed to be the worst movie ever shown on Mystery Science Theater 3000.

When Universal originally released the movie, they thought a limited release in a select group of "college towns" (where they believed Mystery Science Theatre 3000 (1988) was most appreciated) over a longer period of time would lead to a box office bonanza, and keep it from having to compete with the early summer blockbusters like Twister (1996) and Mission: Impossible (1996). Very few of the show's fans were aware the movie had been released, and it languished in relative obscurity throughout the spring and early summer. It was the first, and last, time Universal attempted such a plan.

The makers of Mystery Science Theatre 3000 (1988) were so annoyed by their experiences having to work with a major studio on this film that they later parodied the experience on the TV series. In Mystery Science Theatre 3000: The Incredible Melting Man (1996), the host segments are about Crow's screenplay being purchased by a studio then ruined by the executives (Dr. Forrester and Mother Forrester) as they vainly try to shoot it and screen it for audiences. Series writer and star Mary Jo Pehl would later call the episode an "exercise in healing."

At 73 minutes, the film is shorter than every episode of Mystery Science Theatre 3000 (1988), which typically ran for 90 minutes.

By many accounts, making the movie was not a happy experience for the filmmakers, due to frequent studio interference. At a cast reunion appearance in New York City, Trace Beaulieu was asked what the worst movie featured on Mystery Science Theatre 3000 (1988) was. He replied, "Mystery Science Theater 3000: The Movie".

The TV show's usual density of gags was reduced for theatrical audiences, so that a larger number of people laughing wouldn't cause too much dialogue to be missed.

A sculpture of the head of TV's Frank appears on door #2 of the "theater tunnel." TV's Frank was a popular character played by Frank Conniff, who left the show after the sixth season.

When Michael J. Nelson uses the manipulator arms to free the Hubble, not only does the panel say Manos, but when he clicks the button it plays a subtle reworking of Torgo's theme. Torgo was a central character in Manos: The Hands of Fate (1966), and Nelson made cameos spoofing Torgo throughout Mystery Science Theatre 3000 (1988)'s early run.

Tom Servo says, "Oh, they're flying into a Roger Dean album cover." Roger Dean designed many of Yes's album covers, starting with 1972's "Fragile," many of which look like the scene in This Island Earth (1955).

Frank Conniff said in an interview that he caught a lot of flack for choosing This Island Earth (1955) to be riffed. Conniff explained that he never liked the movie because Cal was presented as a hero. He felt that Exeter was the real hero and Cal was too self-absorbed to be the hero.

The "hard copy of the status report" that Mike reads at the beginning of the film is actually a copy of "Satellite News," the official newsletter of the Mystery Science Theater 3000 information club.

The original DVD release had no special features, and was withdrawn from circulation in 2000. On April 19, 2003, the 7th anniversary of the movie's premiere, an unknown Internet fan released a Special Edition DVD. This two disc set has the widescreen version of the film, the theatrical trailer, TV spots, a review from E!, a slideshow presentation from the 1996 MST3K convention, and the cut host segment and alternate ending.

In the scene in Tom Servo's bedroom, to the left of the interocitor, is Tom Servo's portrait of his "Ideal family" (Haley Mills, Peggy Cass, and Gigantor) from Mystery Science Theatre 3000: I Accuse My Parents (1993).

Most of Gypsy's puppeteering was done by Patrick Brantseg, who would later take over both the puppeteering and voice in the TV series. Jim Mallon's voice was dubbed in later so Mallon could focus on directing the scene.