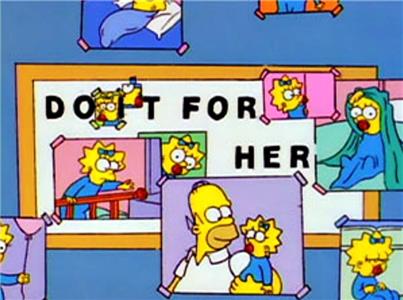 Homer recounts the story of Maggie's birth when the kids ask why there are no photos of her in the family album.


The first bowler Homer sees when he starts his job as a pin jockey is Jacques, the bowling instructor who tried to seduce Marge in The Simpsons: Life on the Fast Lane (1990).

This is the first episode to contain Maggie's name in the title.

Jennifer Crittenden made her debut as a writer for the show in this episode. Crittenden was taking a beginners' writing program at 20th Century Fox when David Mirkin hired her on the show Crittenden's only writing experience before that had been as an intern on Late Show with David Letterman (1993). 20th Century Fox introduced Crittenden to Mirkin, and Mirkin read a script of hers that he liked. When Mirkin first talked to Crittenden, he thought she was a really nice woman who was very mature. Crittenden was only 23 years old at the time, but Mirkin liked her and he hired her.

After Homer quits his job at the power plant, he violently tosses Mr. Burns out of the cart he is driving. Homer then drives across a wooden bridge and tosses a match onto it; the whole bridge is instantly engulfed in flames. David Mirkin came up with the joke, and said that "the thing with animation is that you can stage almost anything and time it perfectly, something you would not be able to do in live action". As a live-action director, Mirkin said he enjoys the amount of control they have in animation.

Mr. Burns places a "de-motivational plaque" in Homer's station that reads "Don't forget: you're here forever". Homer then places photos of Maggie around the plaque to alter it into saying "Do it for her". George Meyer, who enjoys writing jokes that involve anagrams or any other forms of word play, came up with the idea for this particular joke. The joke is also an homage to Al Jaffee's Fold-in features in the Mad magazine.

This was the first episode Swinton O. Scott III directed for the show.

Ricky Gervais named this as his second favorite episode, and said: "Mr. Burns gives [Homer] this terrible plaque above his desk that says, 'Don't forget: You're here forever.' It's about how sometimes things don't go the way you planned, which is pretty amazing in a cartoon. Homer then puts up all the pictures of Maggie he's ever taken to strategically cover this horrible thing so it now reads, 'Do it for her.' It gives me a lump in the throat thinking about it."