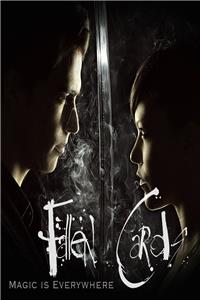 The Year is 2200. A catastrophe of mans own doing. Virus, famine and war have caused an economic collapse. Society has rebuilt itself upon a barren land of dust and debris. Fallen Cards follows the story of Thomas Archer, a product of the Outlands. After the murder of his mother, a stage girl for a traveling magic act, Thomas is cast out into the Outlands. Taken in by a desert warrior, Ludo, Thomas learns the skills necessary to survive the harsh outside world. Coming of age, Thomas travels to Harbor city, A majestic place built on steam power. Paying homage to his fallen mother, Thomas becomes an overnight sensation as an illusionist in the Mayors, Byron Chambers, esteemed casino, the Pearl Room. In a turn of events, Thomas discovers that his estranged archeologist father, John, is still alive somewhere in the Outlands. John, having discovered an ancient artifact older than civilization, is being hunted by men who wish to control this power, the destiny of humanities future. Thomas ...