Voyage to the Planets watch online 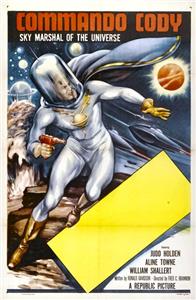 It is the near future as seen from the perspective of the early 1950s. Earth is in radio contact with civilizations on planets in our solar system, as well as planets in other, distant solar systems, and Commando Cody has just built the world's first spaceship.


There is some disagreement among fans of movie serials whether this is a 12-episode motion picture serial or a series of short subjects. This is because it was originally filmed as a TV series which contractual obligations forced Republic Pictures to give a theatrical release before allowing it to be broadcast on TV. As the episodes do not end in "cliffhangers", some serial "purists", considering this a requirement for the classification of a movie serial, refuse to accept it into the serial canon. Unlike short subject series, though, the episodes are not self contained - they follow a definite story arc, and cannot be shown out of order and have the story remain comprehensible to the viewer. Odd claims that unspecified 1950s legislation prohibited release of any motion picture filmed after 1948 from subsequently being released to television - which, if true, would prove that this title had no theatrical history and therefore must be classed as a TV series only - are entirely unfounded. In reality, post-1948 films were being shown on early-to-mid 1950s TV, often while still being available for theatrical showings as well, on a regular basis. In fact, the mass syndication of product postwar product by Republic Pictures itself resulted in many theaters boycotting this distributor for carrying the practice to an excess dangerous to the survival of motion picture theaters. The records of the New York State Censorship Board at the New York State Archives, clearly show that all twelve episodes of this serial were submitted for approval and licensing for theatrical exhibition in that state in 1953.

During the lengthy break between filming the first three and last nine episodes of this TV series, Republic shot another Rocket Man serial called Zombies of the Stratosphere (1952). By the time work resumed on the Sky Marshal series, William Schallert, the actor who played Cody's male colleague "Ted Richards", was no longer available. He was replaced by Richard Crane who played a different character, "Dick Preston". Richards' absence was explained when Cody stated he had been reassigned to another post.