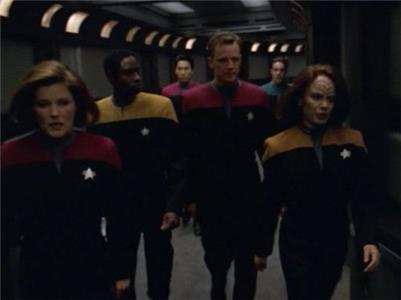 An injured cytoplasmic life-form attaches itself to Torres, tapping into her body like a parasite. Unsure of how to save his patient, The Doctor creates a holographic recreation of a non-humanoid exobiology specialist to consult the case. The consult is going well until Torres refuses treatment when it is made known the Cardassian specialist was responsible for tortuous experiments resulting in the deaths of thousands of Bajorans.


The first episode in the Trek franchise written by Jeri Taylor was the Star Trek: The Next Generation episode named "Suddenly Human" and the last was this one, "Nothing Human".

B'Elanna Torres actress Roxann Dawson did not find this episode a comfortable experience. She cited this as the worst episode she ever took part in, due to the fact that her pet dog died during filming, and all she had to do for that week, while grieving, was lie on a bio-bed.

Outside of Deep Space Nine, the only episodes in which events surrounding the Bajoran Occupation played a major role was TNG: "Ensign Ro" and this one.

Crell Moset is based on Josef Mengele, the Nazi scientist who performed brutal medical experiments on human "guinea pigs" who were deemed "inferior" and not worthy of the right to life according to Nazi creed.