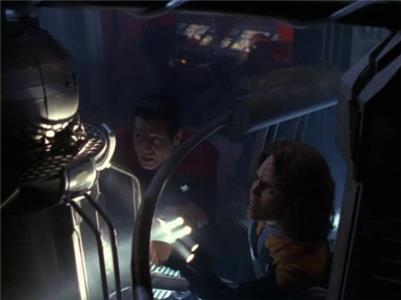 Voyager encounters the Federation Starship Equinox, a Starfleet vessel trapped in the Delta Quadrant by the same alien who brought Voyager there. Equinox is heavily damaged and running with a skeleton crew. Happy to have found each other, Voyager assists Equinox in fighting off an non-humanoid alien race attacking them. But Equinox has earned the aliens hostility. Captain Ransom and his crew have been kidnapping and killing the aliens and using their unique physiology to enhance their warp drive. When Janeway imprisons the Equinox crew they stage a revolt. The Equinox EMH commandeers The Doctor's portable emitter and poses as The Doctor aboard Voyager. The cliffhanger leaves Equinox in retreat, with The Doctor and Seven of Nine hostage, and Voyager under attack by the alien race.


The main bridge of the Equinox is a re-use of the set used for the USS Prometheus, as are the corridors, crew quarters and science lab. They are all slightly altered to simulate the effect of damage.

The episode establishes that the Voyager is now about 35,000 light years away from the Alpha Quadrant.

The USS Equinox is briefly visible on the screen when Seven of Nine shows Kathryn Janeway the Cardassian ship in astrometrics among the 52 ships that Neelix' ship's sensors recorded at the Caretaker's array (VOY: "The Voyager Conspiracy").

In Star Trek: Voyager: Relativity (1999), we see Admiral Patterson introducing Janeway to The Doctor for the first time, remarking that Starfleet was considering outfitting his program onto all Federation star-ships. The Equinox apparently was another test candidate for the Lewis Zimmerman EMH program, as it must have been in the Delta Quadrant at that time or shortly after.

The possibility of another Federation starship being in the Delta Quadrant is discussed in the first season episode "State of Flux".

Kim calls Paris "Turkey Platter" (TP). This is in reference to them finding out that Torres' nickname was previously BLT, her initials.

Second consecutive episode where Robert Picardo gets to play an evil version of The Doctor.

There was much speculation that Kate Mulgrew was considering leaving the show at the end of the fifth season, which would mean Captain Janeway would have to be written out (hence Janeway was attacked by the aliens).

For the first time, recurring guest star Scarlett Pomers is credited in the end credits rather than the opening credits.