Saudade is a documentary about music, passion and nostalgia. It highlights the motivations of five students, in the music department of the Rotterdam


Nas performs with Lauryn Hill in the music video "If I Ruled the World" from the album "It Was Written" recorded for Columbia Records. The music


This short documentary raises awareness and feeling about music-thanatology, an emerging field which integrates music and health care for a patient


The world, the environment and all creatures within it are constantly changing. Evolution is the development of life. However not all change is


Kaisertal is the last inhabited valley in Tyrol not connected by road to the rest of the world. The opening of a tunnel is about to bring change to


Krokus performs in the music video "School's Out" from the album "Change of Address" recorded for Arista Records. The music video begins with shots

The World Festival of Sacred Music: The Americas (2001) watch online


Inspired by a letter written by His Holiness The Dalai Lama, this documentary explores the diverse cultures and music of our world.


It chronicles the 1955 Brooklyn Dodger/New York Yankees World Series based upon the poem, '1955' by James T. Crawford. In unprecedented style, the 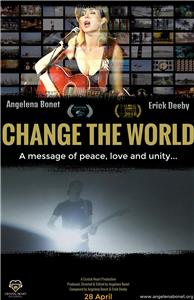 Angelena Bonet's documentary short film and protest song Change The World was co-written from her heart and soul with her late fiancé, Erick Deeby. He had written and recorded instrumental pieces of music for her between 2005 to 2007 then suddenly and unexpectedly passed away three days after they got engaged in August 2007. Angelena wrote the lyrics and melody to his music after his devastating passing and during her time of deep grief. She then created a documentary short film/music video which she produced, directed and edited in its entirety. The title track from her award-winning debut documentary feature film 'Angelena: Change The World' is a message of peace, love and unity.