Follow Laurie (Laura Lewis) as she is stalked from a relentless serial killer (Brandon Battle). Be careful with the people you meet because you never 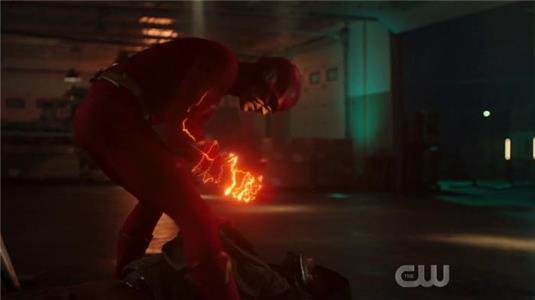 During a battle with Cicada, Nora is severely injured. Due to Cicada's dampening powers Nora's speed healing isn't working, leaving Barry and Iris scared for their daughter's future. Upset about his injured child, The Flash is filled with rage and confronts Cicada in a brutal battle. Meanwhile, Killer Frost keeps interfering with Caitlin's work on the cure. {locallinks-homepage}


Second time Carlos Valdes (Cisco) is absent from an episode from the Flash, the first was News Flash (2018), although a photo of him (as Vibe) appears near the end of the episode.

Nora is paralyzed after getting hit in the back by Cicada making her immobile from the waist down, similar to what happens to her father in Enter Zoom (2015) when Zoom paralyzes Barry and makes him immobile in a wheelchair in the episode, Gorilla Warfare (2015).

The 11th episode was originally titled "Spin Out". It is unknown whether "Spin Out" will be a future episode.

Officer Jones was hypnotized by meta-tech, a reference to Spencer Young in News Flash (2018).

Carl Bork says "You can't hurt Bork, but Bork can hurt you!" This is the exact line that Bork says on the cover of The Brave and the Bold #81, starring Batman and the Flash.

First physical appearance of Shawna Baez, aka Peek-A-Boo, since the season 4 premiere The Flash Reborn (2017).

Andre Tricoteux, who plays Carl Bork, was also the suit-actor of Savitar in season 3, and made several small appearances in episodes of the Arrowverse.

When Cicada hits Nora in the back, it's similar to what Bane does to Batman in the "Knightfall" comics and The Dark Knight Rises (2012).

This episode is titled exactly as the S2 episode of Arrow of the same name, in both instances, a loved one is killed/injured in each episode by getting stabbed through the back by the seasons antagonist; Olivers mother Moira getting killed by Slade, and Nora getting stabbed by Cicada except she survives, both heroes Oliver/Barry are on the ground watching helplessly as their loved one gets killed/injured.