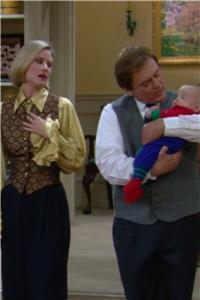 On the subway, a non-English speaking Russian immigrant woman, harried from overloaded arms, gives her infant boy temporarily to Fran to hold onto after Fran offers assistance. In the crush of traffic, the woman is pushed off the subway. Not seeing this happen, Fran thinks the woman purposely abandoned her son. Fran brings the boy back to the Sheffield house, and intends on bringing the child to the police station but can't make it there because of traffic issues. This may be a good thing as Fran learns that the police are after her for kidnapping. Wanting to do the right thing, Maxwell and Fran do bring the baby to the police station, where Fran is promptly arrested. Fran gets herself out of the bind with the police and the Russian woman by using a mutual cultural reference to her advantage. Back at the house, the Sheffields are mourning the absence of the baby, to whom they were getting attached. Grace comes up with what she thinks is the perfect and most logical solution.


While in the police station, Fran mentions Cagney and Lacey, with a joke including Tyne Daly. Tyne Daly would guest star as Mona in the episode "Strange Bedfellows."