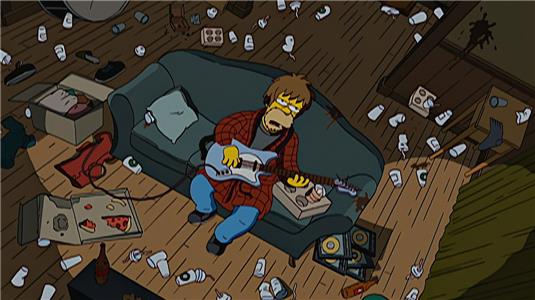 Homer and Marge tell the kids about their life in the early 1990s before they were born, when Marge was enrolled in Springfield College and Homer was the lead singer of a grunge rock band


The song "Shave Me" parodies Nirvana's song "Rape Me".

Homer's first song, "Politically Incorrect", is set to the tune of Nirvana's "Frances Farmer Will Have Her Revenge On Seattle."

Upon release, this was panned by both critics and lifelong fans of the show for contradicting the continuity and history of the show, with the canon already establishing that Homer and Marge graduated in the mid '70s and Bart, Lisa and Maggie being born in the early '80s, but this episode changes it to have Homer and Marge grow up in the '90s and remain childless.

Most of Homer's songs in this episode are a takeoff of the band Nirvana. He even has a song parodied by "Weird Al" Yankovic. In real life, Nirvana frontman Kurt Cobain once said that he didn't feel like he had "made it" as a musician until Yankovic recorded his parody of Nirvana's song "Smells Like Teen Spirit."