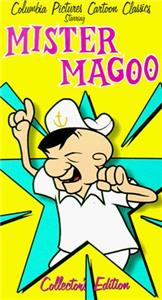 Mr. Magoo is watching a TV program named "Home Roam" which examines the homes of various families and subsequently learns that he and Waldo have been scheduled to air on tonight's broadcast. Magoo proceeds to show the cameramen the various rooms and exhibits of his house. Unfortunately, his publicity is threatened by a burglar and his trained gorilla who break into Magoo's house and attempt to rob it. Of course, Magoo doesn't notice the gorilla (he even mistakes it for Waldo) and reassures the cameramen that Waldo will be all right even if he does have "the manners of a gorilla".


The last theatrical UPA cartoon, and the only one done by the studio's New York branch, which mostly worked on commercials.

The "Home Roam" TV show is a parody of "Person To Person" which featured Edward R. Murrow and later, Charles Collingwood as interviewers.