It is the end. The Doctor must face his ultimate enemy and friend, the Master.

Doctor Who The Return of Doctor Mysterio (2005– ) watch online 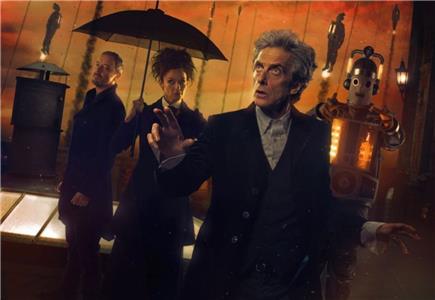 The Doctor must face Missy and the Master in an epic showdown between the three time lords and the cybermen. Meanwhile on a remote farm, the residents are preparing for war. As Operation Exodus begins, the Doctor must face his greatest challenge yet whilst fighting off his looming regeneration.

In an interview given to the Radio Times, Steven Moffat said that he and his predecessor Russell T. Davies briefly considered pranking incoming showrunner Chris Chibnall by telling him (falsely) that this story would end with Missy being pregnant.

While talking to Bill in the barn, The Doctor offers a little girl Jelly Babies, which were a favorite of the fourth incarnation of The Doctor.

The Master asking if the future was going to be "all girl", and the 12th Doctor's response of "We can only hope." references the fan speculation regarding whether or not the 13th Doctor would be female. Jodie Whittaker was announced as the 13th Doctor a few weeks after this episode aired.

The line "I'm the Doctor... the original, you might say." is spoken by both incarnations of the Doctor and is equally valid in both cases, as in the series, the word "Doctor" was revealed in the episode "A Good Man Goes to War" as having originated from the Doctor himself.

The names of the members of the Hartnell family that appeared in the anniversary special "An Adventure in Space and Time" appeared throughout the first season. Bill Potts connects to William Hartnell, (The First Doctor) who was called Bill by his friends. Heather, Bill's girlfriend with the star-shaped iris, has the same name as William Hartnell's wife, Heather. The little girl investigating the standing stones at the beginning of "Eaters of Light" was named Judy, like Judith Carney, Hartnell's granddaughter. However, according to Steven Moffat, this was simply a coincidence.

The Cybermen have appeared in the twelfth episode of a every series since series 5.

When the Master and Missy are tormenting the Doctor about possible ways of killing him, they mention that they know he died once by falling. The Fourth Doctor's regeneration was triggered when the Master caused him to fall from a Radio telescope.

Bill's final fate is very similar to that of Clara, the Doctor's previous companion. Both are exploring the universe on their own in the company of another woman. Both have been rescued from what appeared to be an inevitable death, and in both cases, the Doctor is left unaware of their survival.

Missy tells the Master "I loved being you" and speaks of her admiration of him, echoing the Tenth Doctor's speech to the Fifth Doctor in the Doctor Who mini-episode "Time Crash".

This is the second time the Doctor has tried to suppress his regeneration. Previously, the Tenth Doctor suppressed his regeneration long enough to look in on every one of his former companions. According to a line from The Sarah Jane Adventures (2007)" he looked in on every companion from the original and modern series up to that point. Prior to that in the series, the Tenth Doctor was also able to successfully suppress a regeneration by siphoning off energy to his severed hand, thereby retaining his appearance after healing himself.

Aside from "one-off" companions that appeared in Christmas specials and single episodes, the companions of the modern era that are not shown during the Doctor's vision are two of his male companions: Mickey Smith and Rory Williams.

Both the 12th and 1st Doctors say "I'm the Doctor... the original, you might say.", referencing a line spoken by the First Doctor in the 20th anniversary episode "The Five Doctors". Ironically, the line was spoken by Richard Hurndall, who replaced William Hartnell as the First Doctor after the latter's demise.

Similar to the Doctor at the end of this episode, the John Simm version of the Master refused to regenerate at the end of "The Last of the Time Lords", which resulted in his death from a gunshot wound.

Reveals John Simm's Master's reason for regeneration into Missy. As well as the (presumed) death of Michelle Gomez's Missy

As the Doctor is suppressing his regeneration, he flashes back on memories of his former companions and allies, which had also happened when the Fourth and Fifth Doctors regenerated. The last person he sees is Missy/The Master, who also appeared as a vision during the Fifth Doctor's regeneration. He also repeats the the last words of the Tenth Doctor, "I don't want to go", and the Eleventh Doctor, "(I will always remember) when the Doctor was me."

As the Doctor destroys the Cybermen he recites places where he defeated them previously. One of those sites (Marinus) does not refer to a defeat in televised adventures but in a 1987 Dr. Who comic strip.

The Master was stranded due to a broken dematerialization circuit. This was the same component that the Time Lords deactivated in order to disable the Third Doctor's TARDIS and exile him to Earth. It was during this period of exile that the character of the Master was first introduced.

As of this episode, Steven Moffat has written original material for eight different incarnations of the Doctor: the First, Fifth, Eighth, Ninth, Tenth, Eleventh and Twelfth, plus the War Doctor.

Disregarding Time Crash and archive footage, this is the first time a classic Doctor appears in Doctor Who and interacts with the current Doctor (Peter Capaldi). Unless of course you count Tom Baker in Day of the Doctor.

The Master (while still in disguise) previously told Missy that neither she nor he would do anything "self-destructive" like harming each other. This turned out not to be true.