Davros captures the Doctor and unveils his master plan for the Time Scoop and his armies of Daleks.


The Doctor finds her old enemy has taken her new regenerative form, with that knowledge, she meets Rusty, who want to help her.


It is the end. The Doctor must face his ultimate enemy and friend, the Master. 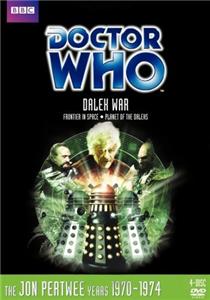 
Last appearance of Roger Delgado as The Master.

Jon Pertwee said that the Draconians were his favourite monsters in Doctor Who (1963).

The futuristic "blasters" used by human personnel in this serial (and by the Master, when impersonating a human officer) appear to be slightly modified replicas of the Mauser C96 "Broomhandle" pistol, with additional attachments to the barrel and sights. Three-four years later, almost the same design would be used to construct Han Solo's blaster pistol in Star Wars: Episode IV - A New Hope (1977).

The last TV acting role of James Culliford who retired because of health reasons after taping this serial.

Malcolm Hulke wrote this story as a Cold War parallel.

The Draconians were originally named Andromedans.

The Ogrons' role in the story was originally filled by the Cybermen.

This episode was watched by 9.1 million viewers on its original transmission.

This episode takes place on Earth in 2540.

Malcolm Hulke intended the Draconians to be like the post-Napoleonic Hapsburgs, although their eventual execution was more akin to a Japanese shogunate.

The original outline had the Cybermen working with the Master but they were swapped for the Ogrons before scripting started.

This serial was released by the BBC on video cassette in the UK in August 1995.

Reviewers have observed that the precipitating incident of the first Earth-Draconia war, as depicted in this story, is very similar to the beginning of the Earth-Minbari War in Babylon 5 (1994). Both space wars begin because an Earth vessel misunderstands the significance of an alien ship's open gunports, and fires on the ship based on this misunderstanding.

The President of Earth was originally a man.