Petticoat Junction The President Who Came to Dinner (1963–1970) Online 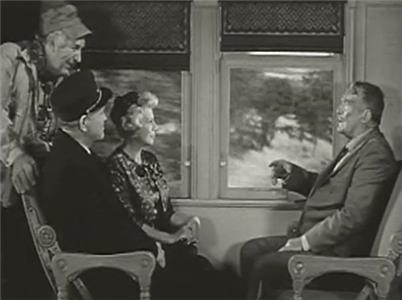 Petticoat Junction The President Who Came to Dinner (1963–1970) Online

Despite Kate being able to convince Homer Bedloe not to scrap the Cannonball, she isn't sure if Bedloe has done something behind their backs to scrap the train anyway. He hasn't, but the C & FW's president, Norman Curtis, who is known to be more ruthless than Bedloe, still has scrapping the Cannonball on his mind. His plans are to connect the Hooterville branch line to the main line so that they can cut down time on an existing express route which would still not serve Hooterville Valley. As he feels Bedloe's mistake was being up front with the people of the valley, Curtis plans on doing the survey work for the necessary upgrade to the branch line on his own, incognito. Although Curtis doesn't intend on appearing as such, he comes across to Kate and others in the valley as a hobo after he takes a tumble in a field, ripping and dirtying his suit and losing his wallet in the process. Curtis ends up seeing a side of Hooterville he didn't expect, one where the Cannonball stops on the ...


In Petticoat Junction as they are repairing the Hooterville Cannonball, they mention the Emma Sweeney, the locomotive used in the 1950 movie, A Ticket to Tomahawk. Also, the engine double for the Hooterville Cannonball is the model double for the Emma Sweeney, the engine that was disassembled in the 1950 movie.