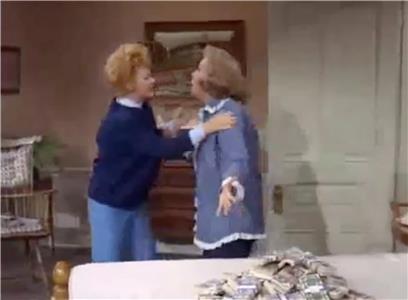 To earn extra money, Lucy decides to rent Vivian's room to two men who want to go to the World's Fair, Vivan having to stay in Lucy's room. After discovering $8,500 stashed in Viv's mattress, Lucy thinks her friend robbed a bank. They quickly realize the cash was heisted from Mooney's bank the night before by the two gentlemen. When the robbers return unexpectedly, Lumpy Lucy stashes the money in her sweatpants while Viv calls the cops.


CBS originally broadcast this episode in black and white.

Harrison calls Bentley the "Bard of the bandits." Only a few months before this, John Williams who plays Bentley, had played William Shakespeare in The Twilight Zone.

One of the bank robbers is named Carter Harrison. On "Here's Lucy" Gale Gordon will play Harrison Carter.