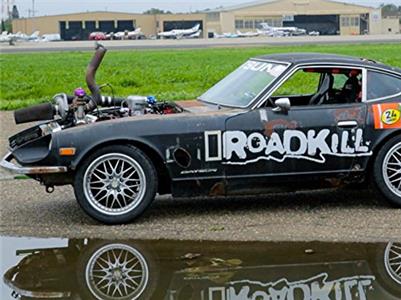 Roadkill is powered by Dodge, but on this episode, the world's most revered rust bucket gets powered by a used Ford 5.0L Mustang V-8 with a Power Stroke diesel turbo. Our old 1971 Datsun 240Z earned its fame with a junkyard turbo on a Chevy 4.3L, but that V-6 finally failed us for the last time and we kicked it to the curb because the crankshaft broke in two during the 24 Hours of LeMons race on Episode 42. We heard Ford 5.0L V-8 blocks break in half at 500 hp, and what better vehicle to test that theory than the Rotsun? We scored a beat-up Fox-body Mustang for $1,500 and threw the engine and trans into the Rotsun, along with the ol' used turbo that was made for a Ford Power Stroke diesel truck. But the big question is: Will the Rotsun finally fail to fail? Find out on this episode of Roadkill.