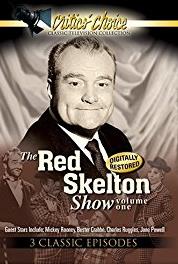 
Red Skelton, who was among the first TV personalities to appear in color on a weekly basis back in the 1950s, only to be forced exclusively into black-and-white telecasts due to a feud between his home network CBS and RCA-controlled NBC, returned to full color with this broadcast.

Freddie and the Dreamers perform 'A Little You' and 'I'm telling You Now.' In the Silent Spot, Red and 'Sheila Rogers' play a married couple returning home from vacation.