The Rockford Files With the French Heel Back, Can the Nehru Jacket Be Far Behind? (1974–1980) Online 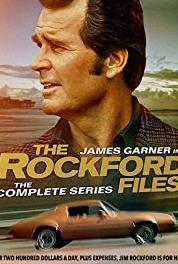 The Rockford Files With the French Heel Back, Can the Nehru Jacket Be Far Behind? (1974–1980) Online

A fashion model friend of Jim is found dead on the ground below her balcony. The police believe it's suicide, but having gotten a desperate phone call from her, Jim believes it's murder.

The gangster talks about somebody killing 19 people and getting rich by his story. He's talking about the infamous Son of Sam. The revelation that he sold his story to a book publisher led to numerous laws that didn't allow perpetrators of heinous crimes to profit from their actions.

The show poked fun at several fashion trends that are probably lost on the modern day audience. Rockford jokes about parachute pants, which were were very popular in the late 1970s and were in fact made from the same material as parachutes.

Jim is taken from his trailer to a remote building by two hoods to be killed. The hoods are distracted by rats and Jim jumps out a window, shot in the rear as he goes out. James Garner was wounded in the Korean War, shot in the rear by "friendly" fire.

In the scene where Rockford confronts Masters while impersonating a funeral director, Masters steps into a new Porsche 928. The 928 was Porsche's first V8 powered production car, introduced in 1978.

The Nehru jacket was a popular fashion item that hipsters wore in the 1960s after becoming famous by its use by Pandit Nehru, the former Prime Minister of India . The joke here is that not only does Rockford have one in his closet (something that is completely out of character for a hard boiled detective), but that he still has it, even though it went out of fashion ten years before.