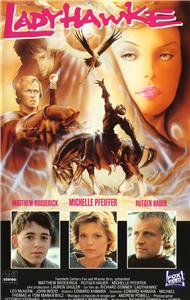 Philipe Gastone, a thief, escapes from the dungeon at Aquila, sparking a manhunt. He is nearly captured when Captain Navarre befriends him. Navarre has been hunted by the Bishop's men for two years, ever since he escaped with the Lady Isabeau who the Bishop has lusted after. Navarre and Isabeau have a curse that the Bishop has placed on them that causes Navarre to be a wolf during the night and Isabeau to be a hawk during the day. Navarre insists that Philipe help him re-enter the city to help him kill the heavily guarded Bishop.


The hawk featured in the movie went under the name Spike II and worked in the Universal Bird Show until 2000 when she was transfered to the National Audubon society and became an Audubon Ambassador until she died in May 2007. Several different hawks were used. One to sit on Rutger Hauer's arm and another for the flying scenes. A third proved to be mostly unusable, as it enjoyed Hauers company so much that it would ruffle it feathers when seated on his arm, making it look more like a chicken than a stately hawk.

In one scene, Navarre tells Philippe to ride his horse to Imperius' castle and slaps the horse's rear to make it ride. However, the first time the scene was filmed, Rutger Hauer (Navarre) slapped the horse too hard and it took off over the hill and off into the horizon. The horse was too powerful for Matthew Broderick to stop, so all everyone could do was sit and wait for him to come back.

Richard Donner originally wanted to cast Rutger Hauer as the evil captain of the guard while casting a younger actor, Kurt Russell, as Navarre. Hauer wasn't interested in that role, but expressed interest in playing Navarre. When Russell dropped out a few days before principal photography began, the part was handed to Hauer.

Three of the castles used for the film were owned by Italian film director Luchino Visconti and his family.

The breed of horse that Navarre rides is a Friesian stallion that originated in the Netherlands, Rutger Hauer's native country. The breed was popular among medieval knights. The most prominently used horse was a 19 year old stallion called Othello.

The tune that Isabeau and Phillipe dance to in the stable is a genuine Italian 14th Century dance named "Trotto". The film also features a Renaissance piece by John Dowland

In the Bishop's garden, he is seen hand-feeding a dancing woman (played by Constume Designer Nanà Cecchi). The pattern on the sleeves of her gown is drawn from the plumage of a hawk, and she employs bird-like motions in her dancing.

Warner Brothers falsely marketed the movie as being based on a true medieval legend. Edward Khmara took the issue to the Writers Guild Association and was awarded a cash settlement from Warners, but the medieval legend claim wasn't dropped.

Aquila, the name of the town Philipe originally escapes from, is actually the Latin word for eagle.

Matthew Broderick and John Wood worked together before, in the movie WarGames (1983).

Some movie posters for this film featured a long text preamble that read: "A crafty young pickpocket stole his way out of a tyrant's dungeon and plunged into an adventure beyond even his own wildest imaginings. And the strangest notion of all was that he was about to become a hero."

Sean Penn and Dustin Hoffman were offered the role of Phillipe Gaston.

The picture was nominated for two Academy Awards, for Best Sound Editing and Best Sound Mixing, but failed to win either Oscar.

The film was released the same year as another medieval film starring Rutger Hauer, Flesh+Blood (1985).

Richard Donner once said that he had considered Mick Jagger for the Bishop.

When Richard Donner was considering Dustin Hoffman for the Matthew Broderick role, he had Sean Connery in mind for the Rutger Hauer part. All three actors would appear in Family Business (1989).

Curtis Armstrong auditioned for the role of Philippe Gaston.

Rutger Hauer doesn't appear until 15 minutes into the film.

John Wood plays a corrupt Catholic bishop. In Lady Jane (1986), he plays John Dudley, Duke of Northumberland. Dudley schemed to place his daughter-in-law, Lady Jane Grey, on the English throne for 9 days in an effort to keep Mary I - a devout Catholic - from ruling the country.

The film was released on VHS by CBS/FOX Video in New Zealand in 1986.

Oliver Harper's Retrospectives and Reviews (2011) did a Retrospective Review of the film which was uploaded on YouTube on June 3rd 2017.

In Star Wars: Rebels (2014), it's lead characters Kanan Jarrus and Ezra Bridger have a similar friendship and arc to the film's lead characters Captain Navarre and Phillipe Gastone. In the animated series, Kanan Jarrus, a former Jedi takes on Ezra Bridger, a 14 year old thief and con artist as his apprentice and instructs him in the ways of the Force as Ezra joins Kanan and the Ghost crew against the evil Galactic Empire that purged the Jedi Order.

Amongst the numerous foes that Navarre defeats in the movie, he only kills 2 people with his own swords. Francesco was killed with his short sword and the Bishop was impaled by his Family Broad Sword.

Based on geographical, historical and astronomical facts, the film's action presumably takes place in 1386, in Italy, 36 years after the Black Death. Yet, although a real total eclipse did occur across southern France into Italy on January 1, 1386, in-film dialogue - specifically, references to the Crusades and none concerning the Black Death - and film marketing indicate that the movie takes place during the 13th century (1200s).

Alfred Molina appears in 2 films from Richard Donner which are this film and Maverick. He plays the bad guy in both films and gets killed by Mel Gibson and Michelle pfeiffer.

A goof and trivium: when Navarre kills the Bishop by impaling him with the greatsword, he drives the sword all the way up to the crossguard/quillons, driving the blade's (projecting) lugs through the body, which would be extraordinarily improbable, if not actually impossible.