Vishnu (14) live an idyllic life in a small fishing village. Vishnu is skilled at hand fishing but he, as a rule never fishes in excess. He is 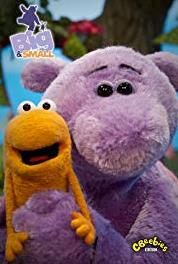 Small is alarmed when he finds out Big has gone fishing because he doesn't think he should catch the fish in the pond. Big explains that he isn't really fishing - there is no hook on the line. He just likes sitting quietly beside the pond, holding the pole and watching the line in the water. Small is quiet for a couple of seconds before wondering loudly when something exciting is going to happen. Big says the point of fishing is that nothing happens - the second he says this, Small spots a shark in the pond. Big and Small rush out of the water. Big looks out through binoculars - and realizes they had actually seen a plastic, inflatable toy shark: the one Small accidentally launched out of the window towards the pond - Big fishes the shark out of the water and hands it over to Small, who is happy to get Sharkie back. But then they see a whale in the water.