We Are All Radioactive (2012) watch online 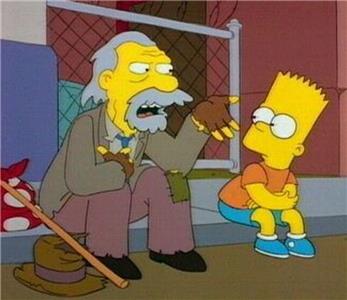 Bart and Lisa meet a homeless person who claims to have created Itchy, one half of the cat and mouse team of their favorite cartoon series, "Itchy & Scratchy." {locallinks-homepage}


Kirk Douglas' last role before suffering a stroke that impaired his speech.

Lester and Eliza look like Bart and Lisa from when they were sketches on The Tracey Ullman Show (1987).

The title is based on the event "The Day the Music Died" on February 3, 1959, when three American rock and roll musicians: Buddy Holly, Ritchie Valens, and J. P. "The Big Bopper" Richardson were killed in a small-plane crash near Clear Lake, Iowa. The event is also mentioned in the song "American Pie" by singer-songwriter Don McLean in 1971.

After completing the episode, Billy Wilder commented, "This episode is one of the craziest episodes ever, I would dare say. It is so packed with references and inside jokes and the ending is so bizarre that a lot of people didn't understand it."

The episode was considered polarizing. In one of its jokes, Bart asks Homer for a large sum of money and Homer immediately pulls out his wallet. Billy Wilder described the scene as "very controversial" among the show's producers; Matt Groening in particular did not like it.

In the original script, the "Amendment to Be" segment was a cartoon that was consciously a parody of the humor style of The Simpsons, but the producers felt that it was not funny. As a result, it was replaced by the "Amendment to Be" cartoon, which is a parody of the "I'm Just a Bill" segment of the educational television series Schoolhouse Rock! (1973). Worried about potential lawsuits, the lawyer of The Simpsons made the animators change the design of the senator in the segment.

William Hickey was the producers' first choice for the role of Chester J. Lampwick. They described him as "famous for being a grouchy, mean old man". Billy Wilder and Josh Weinstein, who often search for "the absolutely perfect voice" when looking for guest stars rather than simply using celebrities, felt that Hickey's gruff raspy voice would be perfect for the role, but he turned them down.

In Nancy Cartwright's autobiography My Life as a 10-Year-Old Boy, she comments that the episode's script was a "gem" and recalls that Kirk Douglas' recording session, directed by Josh Weinstein, was fraught with interruptions. He refused to wear the earphones supplied to him in the recording studio, saying they hurt his ears, so he was unable to hear Weinstein from his booth. Cartwright directed Douglas, who was in a hurry and said that he would do two takes per line at the most. However, despite reading his lines all at once, he only had trouble with one scene; the scene in which Lampwick tells Bart he created Itchy & Scratchy required three takes, as Douglas continuously misread the line "I changed all that" as "I charged all that". Cartwright managed to get him to do a third reading of the line by pretending to sneeze during his second take.

In his script, John Swartzwelder randomly paired David Brinkley and Suzanne Somers together as the parade commentators. The producers were unable to get Brinkley to play his part, so he was instead voiced by Harry Shearer. However, they were successful in getting Somers to voice herself.

Roger Meyers, Sr. being cryogenically frozen is a reference to the myth that Walt Disney was frozen.

Itchy's former name of "Itchy the Lucky Mouse" was a reference to the prototype to Disney's mascot Oswald the Lucky Rabbit, and in fact, the backstory regarding Chester Lampwick, Meyers Sr., and Itchy's creation was a reference to a similar incident regarding Walt Disney, Ub Iwerks, and then-Universal Studios head Charles Mintz, where Disney and Iwerks initially created Oswald, but were legally forced to give exclusive ownership of the character to Universal Studios when they left, which ultimately resulted in them creating Mickey Mouse, the actual mascot for what would eventually become the Walt Disney Company. In this case, however, Meyers, Sr. was closer to Mintz while Lampwick was similar to Disney/Iwerks.

If the homeless man claims to be the creator of Itchy and Scratchy then it is likely that Roger Meyers is a fraud.

When Roger Meyers Jr. pleads his case in court, he mentions that several animated television series and characters were plagiarized from other series and characters: "Animation is built on plagiarism! If it weren't for someone plagiarizing The Honeymooners (1955), we wouldn't have The Flintstones (1960). If someone hadn't ripped off Sergeant Bilko, there'd be no Top Cat (1961). Huckleberry Hound, Chief Wiggum, Yogi Bear? Hah! Andy Griffith, Edward G. Robinson, Edward G. Robinson".