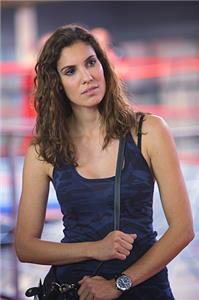 In an alley in Los Angeles a photographer finds the body of a Marine lance corporal, Zuna, from Camp Pendleton, who bled to death; most recently he served as a guard at a bio-lab facility; Callen and company investigate. Zuna's blood contains a high level of heparin (a blood thinner); a pathologist adds details; G calls the death a murder; Kensi checks out a gym, where Zuna has spent much time, and she meets several other Marines and another man; G and Kensi visit Zuna's crib, where Kensi chats up a man who does not exist. Sam goes undercover as a fighter, gets into a match, wins, gets onto a team, gets into another fight, and lands in jail; then Hetty introduces the two warriors to each other. Another warrior dies; news travels fast; the pieces start falling into place; Sam and others rumble into yet another fight, which the good guys win. Hetty recruits someone to serve as a liaison officer with the Los Angeles PD. {locallinks-homepage}

The referee during the MMA fight is famous UFC referee John McCarthy.