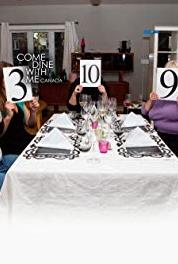 The show goes on the road to Prince Edward Island for the week's competition. The five contestants for this week are: trailer park owner Michael Creighton, who is proud to be high end trailer trash; jack-of-all-trades David Jabbour, a well-known islander who is confident in his abilities; gardener Alison Mills, a control freak; events planner Emma Rockett, a competitive person who believes she throws the best parties on the island; and assistant road construction foreman Nancy Stewart, a native islander who loves to eat a lot. Michael Creighton is the first to host the dinner party. His menu consists of lobster avocado cocktail as the appetizer, beef tenderloin as the main course (salmon for non-meat eater Emma), and brownies with homemade vanilla ice cream for dessert. His guests are surprised to be eating at a campground, which because of the size of Michael's trailer means an al fresco dinner. Much of the evening conversation steers toward "from the island/not from the island", ...