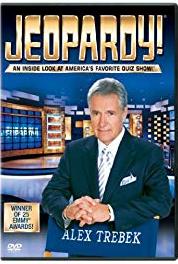 
This show features the debut of a new opening sequence. This opening starts with the Sony Studios animation and zooms out of one of the animated category screens which slide away and the camera moves to the logo. Also, the theme song is already in progress when the opening sequence starts.

This show features the debut of the new set designed by production designer Naomi Slodki. The set features wooden fixtures along with glass blocks that have a purple and blue backlight during the Jeopardy! round and red during Double and Final Jeopardy! Rounds. The giant light up JEOPARDY! letters are retired for a glass door, with the same logo letters on it, that opens when Alex makes his entrance.