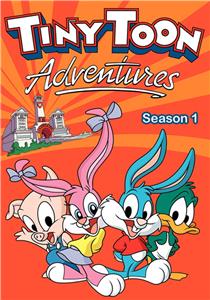 In this series, a new generation of Looney Toon characters study at Acme Acres Looniversity under the instruction of the original characters. The leading characters are Buster and Babs Bunny (no relation) who, with their classmates, have a variety of adventures that are a mix of original stories, film and TV parodies and modern remakes of classic WB shorts. {locallinks-homepage}


Wackyland, the bizarre world that Gogo-Dodo comes from, wasn't created for this show; it actually first appeared in a little known Looney Tunes short named _Porky in Wackyland_ (1938), which also featured a dodo that looked and acted exactly like Gogo Dodo from this series.

The episode "Tiny Toon Adventures" (1990) {Buster and Babs Go Hawaiian (#2.8)} was co-written by 3 then-teenage girls (Renee Carter, Sarah Creef, and Amy Crosby) , who just happened to be fans of the series.

Each episode contained 25,000 animation cels, which was more than double the industry standard at the time of 10,000. This allowed the characters to move more fluidly.

Tiny Toons was originally planned to be a feature length film for theatrical release, but was later changed to a TV series.

Danny Cooksey, who voiced Montana Max, was the only cast member at the time who was not an adult.

Dennis "Quozl" Falk, was an actual overly-obsessed fan the production team encountered while working on Tiny Toon Adventures (1990). He was a stalker who sent Tress MacNeille disturbing letters which caused her to fear for life and cancel any convention appearances she was planning to make around where he lives.

In the episode "Never Too Late To Loon", Acme Acres is found to be located in Arkansas.

This was the first animated series produced by Steven Spielberg and Warner Brothers Animation.

This is the only animated series produced by Steven Spielberg in which he provided his own voice for a guest appearance. For all subsequent cameos in other series, his voice was impersonated by Frank Welker.

Writer Paul Dini said the original idea for Tiny Toons came from then Warner Brothers President Terry Semel, who said he wanted to inject new life into the animation department.

According to producer Tom Ruegger, the famous Warner Bros. animator Chuck Jones was not too keen on the show featuring "junior versions" of characters he'd created. Because of this, characters like Calamity Coyote and Little Beeper (based respectively on Wile E. Coyote and Roadrunner) were used sparingly throughout the show, and Barky Marky (based on Marc Antony) became the subject of a running gag about his lack of appearances.

The nonsensical word "narf" which was made famous by Pinky on Animaniakid (1993) made its first appearance in the secret message in the credits of the episode Tiny Toon Adventures: You Asked for It: Part 1 (1990). The message: "Guy Who Says "Narf" - Eddie Fitzgerald"

Voice Director Andrea Romano auditioned over 1,200 actors for the series.

A soundtrack entitled 'Tiny Toons Sing' was released in 1992 and was available on CD and Audio Cassette.

Buster and Babs each represent a different aspect of Bugs Bunny's character. Buster represents his sarcastic, wisecracking side while Babs is his more off-the-wall, wild side.

Warner Bros. released seven VHS tapes of Tiny Toon Adventures from 1993 to 1996. They are:

In one episode, where Babs performs a plethora of impersonations, she impersonates Marge, Bart, and Maggie Simpson. Tress MacNeille, who provided the voice of Babs, is a regular on Simpsonid (1989).

The majority of the characters are based on classic Looney Tunes stars. Including more minor characters like Beaky Buzzard and Sniffles the Mouse (Concord Condor and Li'l Sneezer respectively).

According to Paul Dini, Danny Cooksey was good as Montana Max because he could do a "tremendous mean voice."

It is speculated by a few that Adam Maitland's bird head from Beetlejuice (1988) was the inspiration behind the look of the Gogo Dodo character.