This half hour film follows the lives of three Princes Diana's look-a-likes as they struggle to find identities after Diana's tragic death.


When the Devil's daughter is bored with life in hell her father sends her to Earth to convert the people there to evil. 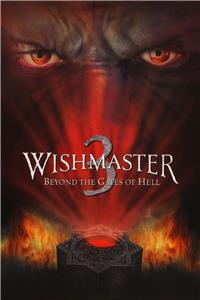 The evil Djinn is back at again, this time wreaking havoc on the students of Illinois' Baxter University.

For the third time, the evil Wishmaster returns with more evil and grotesquery to wreck the life of more innocents. This time, his victim is a beautiful, innocent and studious teenage girl named Diana Collins who accidentally opened up the Djinn's tomb and released him. After gaining his freedom, the Djinn goes into a murderous frenzy though her college campus while trying to find Diana to fulfill her three wishes. While Diana is on the run, she must endeavor to prevent the Djinn from subjecting the entire world to Hell's wrath.


Filmed back-to-back with Wishmaster 4: The Prophecy Fulfilled (2002). There essentially was a weekend between filming the two movies in 2000.

Andrew Divoff was set to reprise his role as The Djinn in Wishmaster 3 and had even written an original draft, but the producers didn't like it so they went with Alex Wright's script instead, Andrew hated it and left.

Was filmed in Winnipeg, Manitoba, Canada.

Both the third and fourth films were shot on a tight 16 day scheduled shoot according to the director Chris Angel.

Both the third and fourth film have been noted as going more of an Action-Fantasy route as opposed to a Horror-Fantasy genre style like the last two films. Both sequelshave also been noted for their Cinemax late night programming type vibes (cheesy acting, softcore style nudity, low budget filmmaking).

Noted for being a simpler rehash of the 1997 original film.