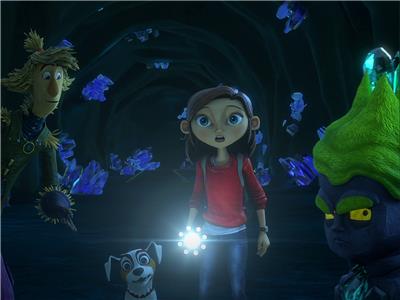 Dorothy, Toto, Scarecrow, and Roquat find a tunnel they think will lead them to Emerald City, but the magic tunnel seems to have ideas of its own. Meanwhile, West and her friends try to escape the Shadow Nome's clutches before he can deliver them to General Guph.


The Shadow Nome transports West and the others to the Deadly Desert aboard a strange flying machine with the head of a ram. In L. Frank Baum's book "The Marvelous Land of Oz," he describes a flying creature with an "Elk's head" whose body was made from a sofa, known as the Gump. Perhaps this creature served as the Shadow Nome's inspiration in constructing his flying machine.

The Shadow Nome uses the Powder of Life to bring his creation to life. This magical substance was created long ago by a Crooked Magician named Dr. Pipt in order to animate inanimate objects. You can read more about it in L. Frank Baum's book "The Marvelous Land of Oz."

The Nome King's Belt has long been believed to be the source of power for whichever monarch ruled the Nome Kingdom, as it has the power to transport living beings from one location to another. You can read more about this magical artifact in L. Frank Baum's book "Ozma of Oz."

Guph uses Extract of Awakening to force Tred to tell him where he took Dorothy and Roquat. You may remember Extract of Awakening, one of Guph's favorite interrogation tools, from when he used it on Scarecrow in Chapter 10 of Lost In Oz, entitled "Bogspeed, Little Shanks!"