News of a young boom operator's cheating wife causes Mason Tucker to lose his sanity and go on a killing rampage. Betrayed by his best friend, the


Chaos, blood, and people killing each other during the last days. It's a rapture that nobody expected. 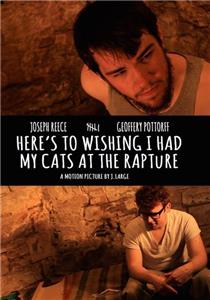 A week shy of the end of the world, Luke Walsh finds himself underground with his once-best friend, Billy Dyer. As the days pass, the two begin to question their friendship, their purpose, and even their sanity.


The rough draft was written in less than 24 hours on a Smith Corona typewriter.

Rock King was improvised by Geoffery Pottorff on the day of shooting when the glass chess piece couldn't be found.

The vomit scene was accomplished with different varieties and consistencies of soup.

The majority of filming took place in winter in an unfinished basement.

The shots of Maya and Luke talking about the rapture in the restroom stall were shot weeks apart and in different locations.

J. Large: [Public restroom] After Luke and Maya's first encounter, Maya leads Luke into the restroom of the bar to seduce him.

J. Large: [Character moving into focus] While Billy explains his looming sense of loneliness to Luke, he begins out of focus and the camera slowly moves toward him until he is in focus.

J. Large: [Character moving into focus] After Luke collapses on the living room floor, Maya runs into focus to grab her cellular phone.

J. Large: [Character moving into focus] As Luke walks toward Maya waiting for him on the swing set, he slowly walks into focus.

The shots of Luke cutting through his wrist to release himself from the handcuff were shot with only actor Joseph Reece and director J. Large on set.