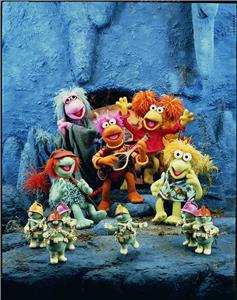 Doc and his dog Sprocket have a hole in their wall, behind which live little furry creatures known as Fraggles in a place called Fraggle Rock. The Rock is also home to the Doozers (who are knee-high to a Fraggle) and the Gorgs (who are giants that think they rule the Rock). One gang of Fraggles (Gobo, Mokey, Wembley, Boober, and Red), under the guidance of the all-knowing Trash Heap (Marjorie), learn about each other and their neighbors and eventually befriend the Doozers, the Gorgs--and even Doc and Sprocket. Meanwhile, Gobo's Uncle Matt explores Outer Space (our world) and sends postcards to his nephew about the Silly Creatures (that's us).


When HBO first started it was purely a movie channel. (HBO = Home Box Office) This was the channel's first original series.

The Gorgs required two performers each: an actor to perform in the costume, and a puppeteer to do the voice and operate the face by radio controls. Previously, full-body Muppet characters (e.g., Big Bird) required the performer to operate the head with one hand, leaving the character with only one functional arm. Operating the face from outside allowed for a more expressive performance from the characters. Furthermore, video cameras installed inside the eyes allowed the performer to see from the Gorg's point of view.

The British segments with Fulton Mckay have been destroyed.

The names "Gobo" and "Traveling Mat" are film-industry in-jokes. Gobos are used to control the shape of light emitted from a source and traveling mattes are used to combine two or more image elements into one final image.

After ceasing production on The Muppet Show, Jim Henson asked writers Jerry Juhl and Jocelyn Stevenson and conceptual designer Michael K. Frith to 'create a show for kids that will save the world'. He gave them access to his house in London, England to develop what would become Fraggle Rock.

Michael K. Frith originally conceived the Trash Heap character for the tenth season of Sesame Street. His reasoning was that archaeologist always gather the most useful information about ancient civilizations by going through it's trash. When the Sesame Street producers decided not to use the character, Frith was able to resurrect her while developing Fraggle Rock.

Originally, five different endings for the opening, with each of the main Fraggles saying "down at fraggle rock", were filmed and meant to alternate between episodes. However, the one with Boober was the only one consistently used. One with Wembly was included in the episode "The Terrible Tunnel", while one with Gobo was used in "The Finger of Light".

When Jim Henson first thought of the show, the working title was "The Woozle Show."

Jim Henson spent many hours at the Robotorium, INC with Debbie the Roboteer learning to use the new Apple IIE desktop computer (her cousin programmed with the first RS232 interface ports) and interfaced with a Rhino XRII bored out airplane aluminum 6 to 8 axis robotic arm. Through experimentation they came up with a way to have one puppeteer use an actuated mitt controller arm to animate miniature puppets (the worm-like critters) or even choruses of different puppets through the use of the same robotic applications and programming. The mitt ran the motors on each axis of each of the puppets. The puppeteer put their arm into the mitt controller and went through the motions.

An animated series based on the show aired on NBC Saturday mornings.

Cantus the Minstrel was created to resemble Jim Henson.

Karen Prell, the voice of Red Fraggle, auditioned for and very much wanted the role of Mokey. Jim Henson called her up and decided to hire her, but for the role of Red. Prell was excited to be hired, but when she hung up the phone she thought to herself, "They want me to play RED?"

When Jim Henson pitched the show to HBO executives, he described it simply as a "show for kids that would end war." HBO ordered the series on the spot, the first ever for the fledgling network.

Gerard Parkes, the man who plays Doc, also plays the bartender on The Boondock Saints.