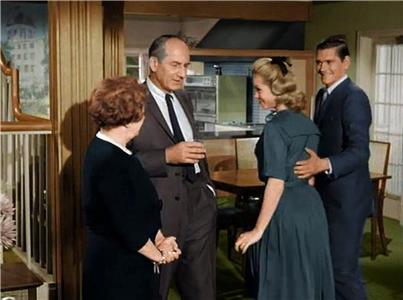 When Darrin and Samantha receive news that his parents, Frank and Phyllis Stephens, are coming by for a visit in a couple of weeks to meet Tabatha for the first time, they reminisce about the less than uneventful last visit Darrin's parents had with them. The story... Aunt Clara takes Samantha up on her offer to "come by anytime for an extended visit" and plans to stay for the weekend. Darrin's parents are also coming by to stay for the weekend, they who Samantha has not yet met. As Samantha is nervous about that first meeting if only because she doesn't consider herself a seasoned housewife probably up to the standards of Mrs. Stephens Sr., Samantha is glad for Aunt Clara's arrival if only to have some moral support from one of her relatives. Aunt Clara can't help but provide more than moral support, that help in the form of witchcraft to make Samantha the perfect housewife. And Aunt Clara sees nothing wrong in being up front with the Stephenses that she and Samantha are witches ...


This is the second "repeat from Season 1" as a flashback from Season 1. The first was the Christmas episode.