Wendy (Marla Sokoloff) is left a struggling winery in her father's will. While learning to manage it, she must contend with a cunning competitor and


'Plants Are Cool, Too' is a video series that acknowledges that animals are interesting, but plants are cool, too. In this second episode, the 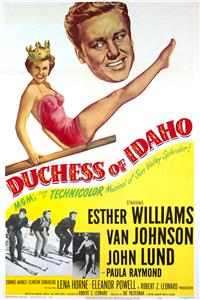 Ellen Hallet is in love with her playboy boss, Douglas Morrison, but is too timid to do anything about it. To help her, her roommate Chris decides to step in and devises a plan. Chris follows Morrison on his trip to Sun Valley, Idaho and plays the over-attentive female in hopes that he will send for Ellen who often plays his "fiancée" when he has a female he can't discourage otherwise. Complications arise when Chris catches the eye of band leader Dick Layn and finds herself caught in a triangle between the two men.

"Lux Radio Theater" broadcast a 60 minute radio adaptation of the movie on January 7, 1952 with Van Johnson and Esther Williams reprising their film roles.

"You Won't Forget Me" (music by Fred Spielman, lyrics by Kermit Goell), sung by Lena Horne, was cut from the movie. For years, Lena's prerecording was missing until rediscovered and then issued on the 1996 Rhino DC box set, "That's Entertainment!" Joan Crawford (dubbed by India Adams) later performed the number in Torch Song (1953).

Already a standard, Cole Porter's "You Do Something to Me," sung by Lena Horne, was dropped from the film.

"Warm Hands, Cold Heart" (music and lyrics by Al Rinker and Floyd Huddleston), sung by Mel Tormé, was deleted from this film, leaving The Velvet Fog tuneless and with only a bit of dialogue. The prerecording can be heard on the Rhino CD, "Mel Tormé in Hollywood."