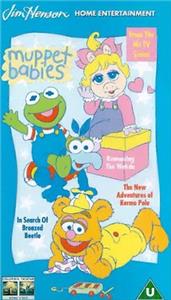 
A few months before the series' debut, The Muppet Babies were introduced in a musical number in The Muppets Take Manhattan (1984).

"Muppet Babies" made extensive use of clips from popular movies and Hollywood shorts as part of the effect on the imagination efforts of each Muppet. Because of problems with royalties and licensing, these clips have kept this show out of syndicated reruns or seasonal DVD releases, and this problem is unlikely to be resolved any time in the foreseeable future.

The show started out with a run time of 30-minutes, then was boosted to 60-minutes. It ended up going to 90-minutes when Garbage Pail Kids (1988) was canceled after a mere 13 episodes, and CBS had nothing else to fill the void.

In the second season, the show was expanded to 60 minutes and the title was changed to "Muppets, Babies, & Monsters". An additional segment titled "Little Muppet Monsters" was added. The segment featured new puppet characters and animated segments. These segments were so unpopular that they were cancelled after two episodes. The remaining half-hour was filled with reruns from the first season. The show's closing theme song was changed to an instrumental version of the "Monsters" theme song and it remained until the end of the show's run.

In a 2016 interview, Dave Coulier revealed that he was not allowed to sit next to Frank Welker during recording sessions, because they would inevitably ruin takes by making each other laugh.

Skeeter is the only one of the main baby characters who was never made in an "adult" puppet form for The Muppets' standard appearances. She is unique to this animated version, and was created because the producers wanted another female character in the show. She was voiced by men (Howie Mandel and Frank Welker), just like most of the adult female puppet characters.

The faces of the non-Muppet human adults were rarely seen (not counting the stock footage clips).

Some of The Muppets' more popular puppet costars are conspicuously absent from this animated version, except in stock clips from The Muppet Show (1976) and related projects. Most of Doctor Teeth's Electric Mayhem Band are absent because their Muppet Show gags revolve primarily around thinly veiled indications of drug use, a big no-no for a children's show. The exception is their drummer Animal, whose shtick is simply being insane and feral, which is apparently OK for children to see. Crazy Harry, an active vandal who goes one step beyond Animal in the lunacy department, was probably seen as a bad role model whose appearance would have jinxed the show's chances of being made. Uncle Sam Eagle, the sourpuss straight-man of the Muppet Show, doesn't suit the playful, anything-goes mood of the cartoon and would have been off-putting to children. Rizzo the Rat was probably too unappealing and/or unnecessarily redundant to other characters' functions. It is odd and inexplicable that Sweetums the Monster was left out, considering the enduring popularity of his fellow Monsters on Sesame Street (1969), aimed at the same demographic - perhaps it was an issue of time and cast constraints on the series. The absence of most other characters including Swedish Chef, Lew Zealand, Beauregard the Janitor, and the Statler & Waldorf duo, can probably be chalked up to the fact that it's a bit difficult, even with the most permissive Muppet logic, to even imagine these characters as babies.