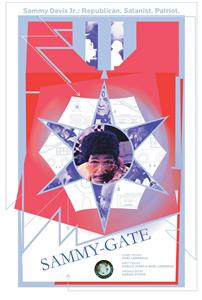 Equal parts "Dr. Strangelove," "Zelig," and "Network," "Sammy-Gate" takes you on a psychedelic trip into the 1970s polyester heart of darkness. On a USO tour of Vietnam, Sammy Davis Jr. stumbles upon a CIA-sponsored plot to smuggle heroin into the United States. Through comic ineptitude mixed with noble intentions, Davis triggers a chain of bizarre missteps by the FBI, the Mafia, and the Nixon administration that result in the Watergate scandal.


Film was shot on vintage Panavision cameras and lenses from the 1970s.

Phil Proctor reprises his role as Richard Nixon 45 years after first playing the president as a member of the Firesign Theatre.