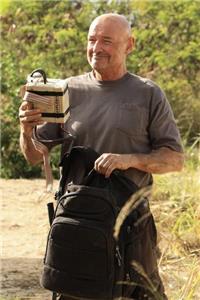 Sawyer and his group are arrested by Widmore's group. Meanwhile Jack awakes in the Hydra Island and Sayid tells to Jack that Locke saved him. Now there are only the three against Widmore and Locke asks Jack to help him to rescue Sawyer's group from the cages. Sayid turns off the generator and the smoke monster attacks Widmore's camp; Jack opens the cages to release the group. Locke kills the guards that are protecting the plane and removes the explosives but he tells that the plane is not safe. Locke tells that they will need to use the submarine to leave the island. Jack pushes Locke into the water, but they are attacked by Widmore's group. Locke and Claire are left behind and he tells to her that she would not like to be in the submarine. Jack finds explosive in his backpack but Jack tells that nothing will happen to them. Sayid runs with the bomb to save the group; however Sun is trapped in the debris and Jin stays with her and only Jack, Kate, Sawyer and Hurley survive. In the ...


When Jack is talking to Locke he says "what happened, happened." This is the name of a Season 5 episode.

The warning alarm on the submarine that plays after the detonation of the C4 blocks is the same warning alarm from earlier in the series that would sound when less than 2 minutes remained on the timer in the "Hatch".

As Jack brings an unconscious Sawyer on to the beach following the explosion, he meets up with Kate and Hurley. These were the four people that Ben told Michael to bring in the Season 2 finale, somewhat proving Ben/Jacob knew how important they were from the beginning.