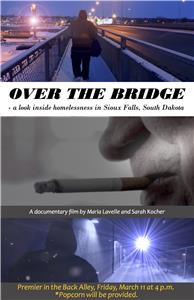 "Over the Bridge" is a documentary short exploring homelessness in Sioux Falls, South Dakota.


Was shot with a canon 550d DSLR camera.

Was originally supposed to be a 3-minute video story, but after the first day of shooting, the producers, Maria Lavelle and Sarah Kocher, decided that the issue of homelessness in Sioux Falls was too big to fit into a 3-minute video.