Comix Scrutinizer reviews another issue of "Skull". Does he hate it as much as he hated the other issues of "Skull"? 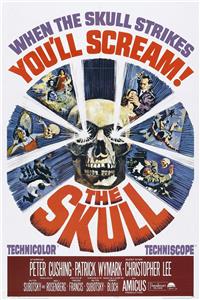 A collector of esoterica, Dr. Maitland, buys an unusual skull from his ordinary source of artifacts. The skull is what remains of marquis De Sade. Much too soon he discovers how the skull affects him: by turning him into a frenzied killer.


The heirs of Donatien Alphonse François de Sade pressed charges to prevent any use of his name on the advertising material. The changes on posters and lobby cards were made at the last minute by sticking the new title "Le Crâne Maléfique" (meaning "The Evil Skull") on top of the former, "Les forfaits du Marquis de Sade" (meaning "the Infamies of Marquis de Sade"). Only on that condition this movie could finally be released in the French territories.

According to Director Freddie Francis, the "screenplay" by Producer Milton Subtosky was little more than an outline and a great deal had to be added during filming, and later in post-production, to bring it up to adequate feature length.

Although passed by the BBFC in October 1965, this movie did not get a release in the U.K. until November 1966, when it went out as the bottom half of a double bill with The Idol (1966).

Robert Bloch, who wrote the story on which this movie was based, wrote the novel on which Psycho (1960) was based.